Build and Manage Your Hybrid Cloud with Hyper-Converged Infrastructure (HCI)

On Wednesday 10th February 2016, the day after VMware announced Workspace ONE, see Digital Workspace, they announced a new major version of Virtual SAN (vSAN) and vRealize Suite 7. A replay of the announcement can be seen in a video at http://www.vmware.com/digitalenterprise

Arnaud Chain, VP Enterprise & Strategy, VMware EMEA introduced the announcement of vSAN 6.2 which he said increases storage virtualisation by 10 times by the use of technologies such as: –

vSAN fits in with VMware’s Hyper-Converged Infrastructure (HCI) which combines the following defined in software to provide one integrated architecture: –

The announcement described how Clouds are becoming the new Silos with different tools and skills to manage and secure them.

VMware provides a Unified Control Layer across Multi-Clouds such as the following to deploy, secure and manage them:-

vSAN has been implemented at more than 3,000 customers.

vSAN 6.2 provides all flash performance with superior economics. Usually with storage you have a choice between high performance or cost effective, whereas vSAN 6.2 combines the two providing: –

Hardware Partners have certified solution as vSAN Ready Nodes and you can get hardware with vSAN pre-installed from vendors such as Fujitsu and Supermicro. There are also Engineered Appliances such as EVO:RAIL containing vSAN.

Now you can purchase an EVO SDDS based integrated system containing: –

vRealize Suite is the leader in Cloud Management and Automation and is the most comprehensive in the market-place. It works across Private Clouds running on vSphere and other hypervisors as well as Public Clouds.

The Suite consists of: –

vRealize Automation allows you to create applications and then deploy and manage them across their life-cycle.

vRealize Business provides a real time view of the costs of running your applications.

vRealize Operations and Log Management is used for day to day management of the underlying infrastructure.

The announced vRealize 7 contains the following versions of the products: –

vRealize Automation 7.0 allows application blue printing which sets up the networking and storage for the applications.

The latest version of NSX extends from the datacentre to AWS and Azure, it is the leading network virtualisation solution.

As part of these announcements Kenny Wilder, Director of Network Infrastructure at Fulton County Schools described how they improved performance of a critical system running on SQL by moving to vSAN, where response times had dropped from 50-60ms to <1ms and tasks that used to take 35 minutes now only take 5 minutes. They are now planning on moving SAP and their AirWatch implementations to vSAN. Kenny explained how vSAN works out much cheaper than traditional SAN solutions and how simple it is to implement. They have 10TB of vSAN at the moment.

Rawlinson Rivera (@PunchingClouds), Principal Architect, Office of the CTO – SABU at VMware gave some more details regarding vSAN 6.2 including: – 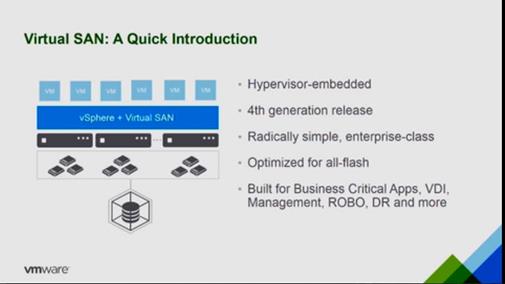 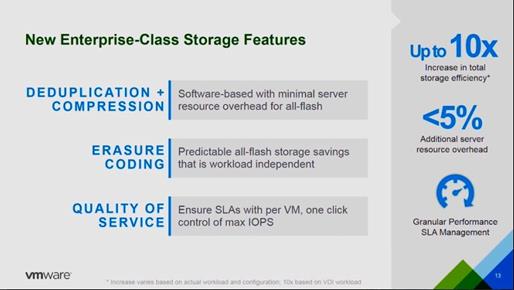